Our story
Irrigreen began when our founder’s wife became interested in putting an irrigation system in their home.
The more research Gary did, the more he realized how much water is wasted by conventional irrigation systems. The EPA agrees and states: “As much as 50% of the water we use outdoors is wasted from inefficient watering methods and systems.”
This challenged Gary’s sensibilities as an engineer in the commercial inkjet printing industry … he had earned over 30 patents, designing computer controlled printers (that precisely spray ink in shapes.)

With his ideas and manufacturing experience, Gary soon had a design concept that he used to produce the first Irrigreen prototypes. Three years later, after multiple designs, performance tests, software updates and three more patents pending, the world is seeing the tremendous water saving benefits of the Irrigreen irrigation system.  And not a moment too soon.

As a company, we are committed to saving water with exciting breakthrough technologies, providing world-class customer service, and giving our employees a great place to work and grow.

Irrigreen manufactures advanced landscape irrigation systems that save water and simplify installation
We use digital technology to precisely water to the exact landscape shape, saving up to 50% of the water required to irrigate with conventional technology.

The irrigation system combines next-generation digital technology with a patent-pending nozzle design that evenly distributes water in the shape of any landscape.  It eliminates the wasteful overlapping arcs that conventional irrigation systems need to cover landscapes.

In addition to saving water, the eco-friendly irrigation system also significantly cuts installation time and materials; up to 85% less petroleum based underground pipe is needed to install an Irrigreen system. 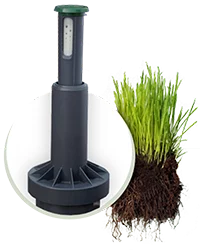